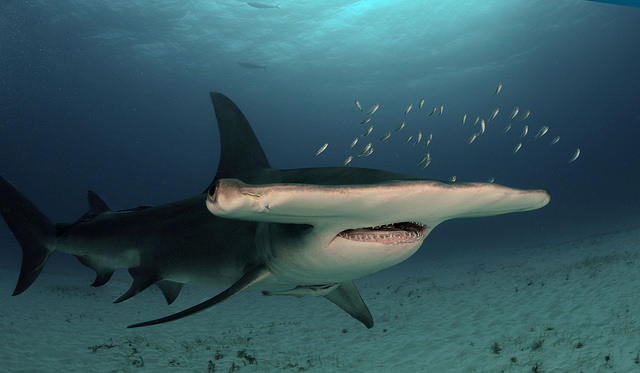 There are really no words to describe the graphic slaughter of a pregnant 13-foot great hammerhead shark and her 34 pups that recently took place in Destin, Florida.

Due to the extremely graphic and disturbing nature of the footage, we chose not to embed it on Shark Feed. You can click here to view it on YouTube.

According to Jeff Bratcher, who shot the footage, the shark’s fins were removed, and the animal’s body was riddled with holes that appeared to have come from a spear. In plain view of tourists, a fisherman sliced open the pregnant shark and removed her 34 dead pups, tossing them into a nearby trash can.

“My oldest son, he said ‘Dad, this is wrong,’ and I said I didn’t know what was endangered or what wasn’t,” Bratcher told AL.com. “I was just in awe, but the more I got to think about it, I thought ‘this ain’t right.'”

Bratcher is correct — sort of. The great hammerhead shark is classified as endangered by the International Union for Conservation of Nature. It is not, however, considered endangered by federal authorities under the Endangered Species Act. Florida state law prohibits the harvest, possession, landing, purchase, sale or exchange of the great hammerhead, according to the Florida Fish and Wildlife Commission.

The plight of the great hammerhead underscores the challenges facing animal conservation: different, oftentimes contradictory state and federal laws can make it difficult to protect species at risk. Even the most concerted conservation effort (like Florida’s) can be completely undermined by weaker laws in a neighboring jurisdiction.

According to the IUCN (the international organization that does consider the animal endangered), great hammerhead (Sphyrna mokarran) populations have fallen 80% in the past 25 years. The animal is extremely valued for its fins, and has been subject to overfishing around the world.

Nonetheless, the IUCN states that there are “no known species specific conservation measures in place for S. mokarran“, and that “fishing proceeds unmanaged and unmonitored”.