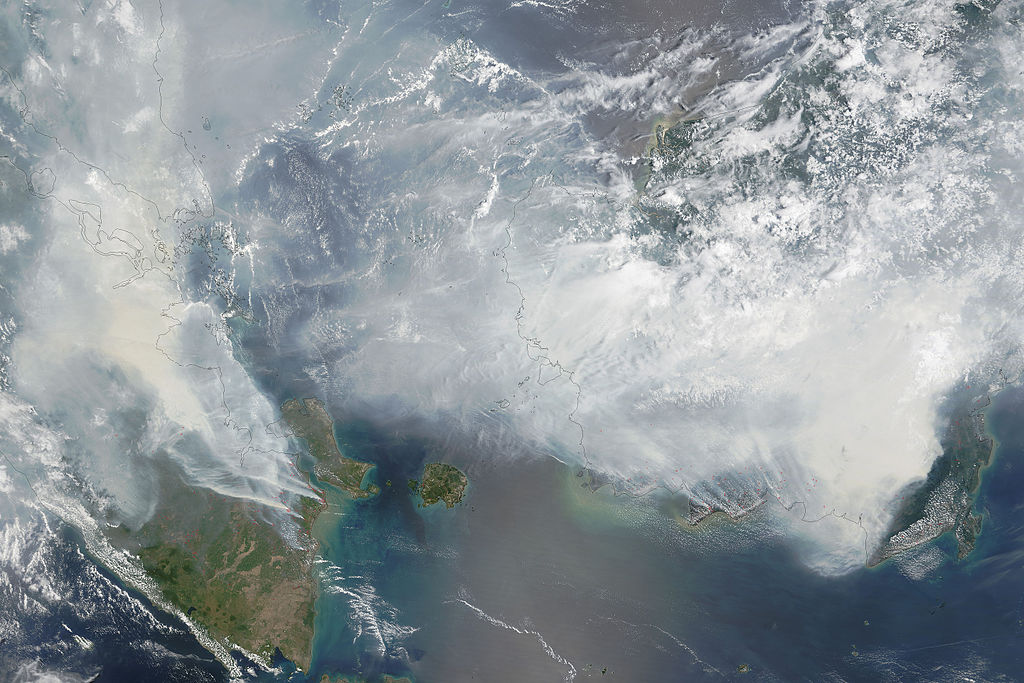 In 1997, more than 12 million acres of rainforest across Indonesia burned to the ground, creating a monstrous cloud of haze that stretched from Sri Lanka to Australia. The fires caused $3.5 billion in damage across southeast Asia, sent 543 million tons of greenhouse gases into the atmosphere and caused respiratory problems in an estimated 20 million Indonesians.

It should — because the exact same thing is happening right now. Wildfires raging out of control in parts of Indonesia have spurred largely preventable humanitarian, climate and environmental crises.

Over the past several months, more than 8,000 square miles of forest have burned — more than the land area of New Jersey, Quartz reports. As the fires continue to burn, they’re releasing more greenhouse gases into the atmosphere than “all U.S. economic activity,” according to a recent report from the World Resources Institute. For now, Indonesia is the world’s fourth-largest emitter of carbon dioxide.

Merciless flames are threatening sanctuaries and some of the only remaining natural habitats for countless endangered animals. Conservation organizations have had to evacuate both staff and subjects from their facilities as the fires have crept progressively closer.

“Our colleagues at the orangutan rescue/rehabilitation centers in Kalimantan are struggling on a daily basis to try to control fires in orangutan habitat and to protect the orangutans already in their care, working all the time under horrendous environmental conditions dangerous to their own health. This situation is heartbreaking,” the Animal Sanctuary Trust Indonesia writes on its blog.

The fires have also taken their toll on people: More than two dozen deaths have already been reported. Across the region, millions have been exposed to potentially hazardous smoke as a thick cloud of haze has spread across southeastern Asia.

Fires in Indonesia are nothing new: Every year during the dry season, large swaths of forestland throughout the nation are set on fire to clear the way for agricultural use, namely palm oil and timber plantations. Although controversial, the practice is not uncommon. Known as slash-and-burn agriculture, the intentional burns clear the equivalent of 300 football fields of forestland around the world hourly.

This year, a perfect storm of circumstances similar to those seen in 1997 has caused the fires to rage out of control. Exceptionally dry deposits of peat, a mixture of partially decayed plant material, have fueled the fires past the point of management.

“Left in its natural waterlogged condition, peatland rarely burns,” Greenpeace Asia explains.
“Untouched tropical rainforest is similarly fire-resistant. However, two decades of forest and peatland destruction by the plantation sector have made parts of Indonesia into a giant tinderbox.”

Although there are government regulations in place to preserve forestland and regulate the areas that can burn, lax oversight and a lack of resources often prevent enforcement.

To make matters even worse, this year’s El Nino event (the strongest since 1997) has brought unusually dry, windy conditions that are quite literally fanning the flames past the point of no return.